In 1997, Stephen Quirk had one of his photographs of Bully Pulpit (later known as Bullyclub) published in Portland’s Casco Bay Weekly.  This lead to a twelve-year collaboration with the band on various projects and introductions to other local musicians, including frequent collaborator José Ayerve of Spouse and A Severe Joy.

By 2010, Stephen was seeking a way to package his album design, website creation, and photography services to musicians, while also helping bring attention to Maine’s thriving music scene.  Factory Portland launched as a result.

These days Factory Portland functions solely as a blog, featuring interviews with local and non-local musicians, concert reviews, and more!

Stephen Quirk
Stephen is a freelance builder of websites and creator of content. He worked in the Technology Department at his alma mater, Maine College or Art and as an Events Wrangler at Automattic.

Stephen has exhibited his photography in California and throughout New England and served as Associate Director of a Boston-based non-profit overseeing the organization's technology, visual design, social networking, and event planning.

He lives outside of Portland with his wife and two children.

Megan Quirk
Megan works as a legal assistant at a large Portland law firm. She recently received her Master’s Degree in Public Policy and Management, as well as certificates of graduate study in Nonprofit Management and Social Policy Analysis, from the Muskie School of Public Service at USM. She is also a graduate of the Stern School of Business at New York University, and was a team leader for various volunteer projects for New York Cares.

Megan and Stephen welcomed a third member to the Factory Portland team in mid-2014… their daughter, Kate. 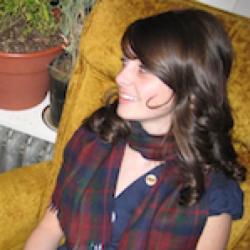